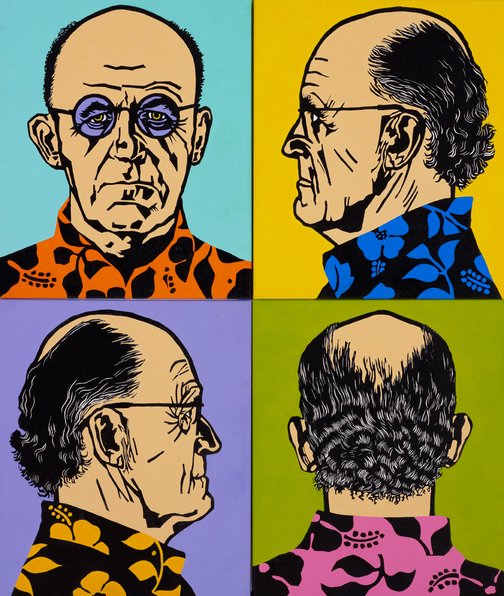 Ted Robinson is a producer, director and writer. He has worked in most areas of the entertainment industry though he is best known for his production and direction of satirical TV series such as Good news week, The Gillies report and The big gig among others. He is currently involved with a new TV drama comedy series called Die on your feet starring Adam Hills, Alan Brough, Corinne Grant, Greg Fleet and Stephen Gates.

Susanne de Berenger has known Robinson for over 30 years. ‘But it was last Christmas when he came to a party at my house that I knew I had my subject for a portrait,’ she says. ‘He was wearing a black shirt as usual. I asked him if he ever wore a Hawaiian shirt and he replied that he did not but that he collected them. It was a good guess. The floral shirts I have depicted here are not of Hawaiian origin but are adapted from traditional Tahitian designs.

‘Ted is not a classically handsome man, at least not on the outside, but perfection is difficult to portray and I wasn’t interested in painting “a pretty picture”,’ says De Berenger.

‘Ted is responsible for much of the comedy we see on our screens. He is the man behind the scenes, adept at handling the egos and demands of those in front of the camera. I’ve chosen to shine the light on a modest man, for a change, and from four different angles.’