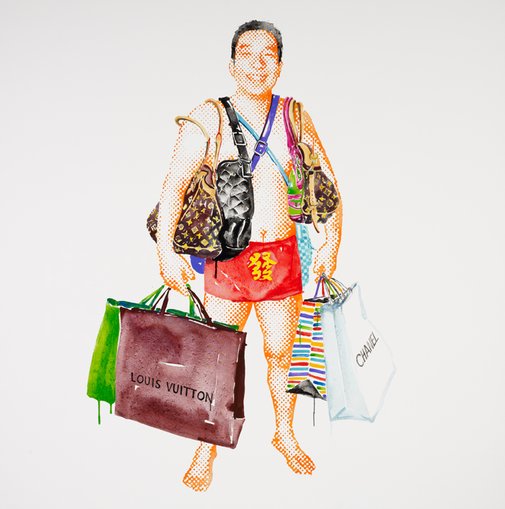 My name is Fartunate – self-portrait

In this satirical self-portrait, Song Ling makes some strong statements about the contemporary culture of modern China and the blind pursuit of luxury goods as an overt symbol of wealth and status. In a classless society, the new super rich have become role models so that even lowly paid shop assistants and students aspire to the same levels of excessive consumerism, sacrificing food on the table to buy yet another Louis Vuitton or Chanel handbag. The vanity of showing off the latest brand name item to give the impression of wealth and abundance only reveals a spiritual emptiness, a nakedness of the soul. The superficial veneer of luxury cannot hide that fact that on the surface, the Chinese seem to be a powerful nation, but the gap between rich and poor is as great as ever. This is exemplified on a grand scale in China with over-the-top events such as the Olympics and the World Expo, where money seemed no object.

‘The title of the work is not a typo, but a play on words.’ The artist has painted the Chinese character for the word ‘far’ on his underpants, which translates as ‘getting rich’. It is also a phonetic play on the sound of the number eight, a lucky number in Chinese numerology. So the ideas of fortune and gaining wealth are combined, but when this is done, it seems like a stupid mistake made by an uneducated person who cannot spell in English. The suggestion made here by Ling is that chasing Western luxury and brand names to such a degree can actually ‘brand’ you as an ignorant upstart.