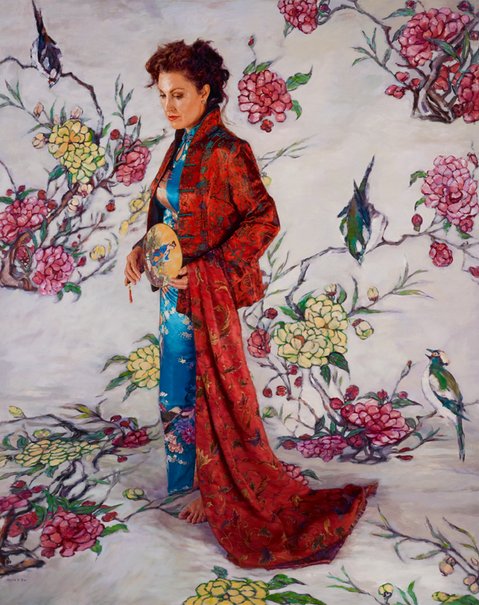 Cheryl Barker is one of Australia’s leading sopranos with a busy international career. Roles for which she is noted include Cio-Cio-San in Madama Butterfly, Tosca and Emilia Marty in The Makropulos secret among others. She made an exciting role debut as the Marschallin in Richard Strauss’ Der Rosenkavalier for Opera Australia last year and makes her debut as the Countess in Strauss’s Capriccio for Opera Australia this year.

‘During last September and October, I finally had some time to rest after many years working laboriously,’ says Apple Xiu Yin. ‘I spent this time unwinding in my backyard listening to the sound of the wind and the birds chattering. I appreciated the multitude of white flowers upon my cherry tree. The smell of pollen wafted across my nose. My mind went blank as I totally relaxed and my heart filled up with nature. It was an incomparable feeling. This was, I think, a type of meditation.

‘My painting was created during this state. Cheryl Barker is an astounding soprano. She has played many roles in opera but one in particular caught my attention: Madama Butterfly in which she showed her understanding of women of Eastern cultures. In this painting she assumes the role of an Eastern lady hearing birdsong, showing a beauty, which comes from a meditative mind. I have created a mere illusion, which hopefully leaves people thinking.’