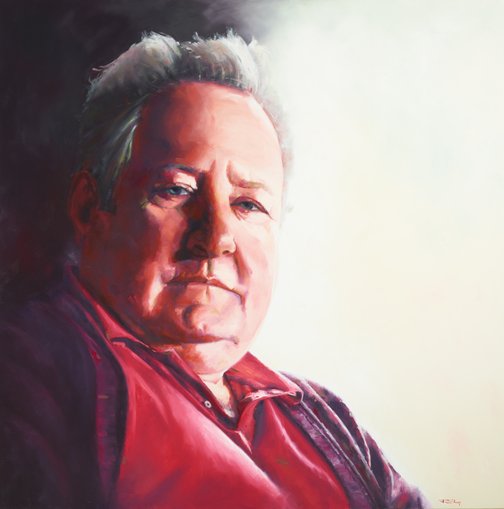 A strength of character

John Wood is one of Australia’s favourite actors with a career spanning over 40 years. He starred in Network Seven’s Blue heelers for eight years, winning a Gold Logie in 2006 after being nominated 10 times in a row. He has also won several Silver Logies for his work in Blue heelers, Rafferty’s rules and Power without glory.

Raelene Sharp lives near Wood in the Yarra Valley close to Melbourne. Last year she asked him if he would model for both a portrait workshop she was conducting and her entry into the Archibald Prize.

‘I approached him because of his outstanding career, and the fact that he lives locally and is very much a part of the Yarra Valley community,’ says Sharp.

Sharp visited Wood in his home where she sketched him as they talked and got to know each other. ‘His dogs kept jumping into his lap so it wasn’t easy,’ she says. Wood then did several sittings in Sharp’s (dog free) studio.

Sharp decided to focus on Wood’s very recognisable, well-known face. ‘I did a few studies of him to find the right look in order to represent his personality. We have now become quite good friends.’

Born in Melbourne in 1957, Sharp began her career as a graphic artist. She now concentrates on portraiture though she also paints in other genres. She has received many corporate and university portrait commissions. She is a five-time finalist in the Shirley Hannan National Portrait Award, winning in 2006. She has also been a finalist in the James Farrell Self-portrait Award and the Black Swan Prize for Portraiture among others, and has been hung in Melbourne’s Hidden faces of the Archibald Prize – the Victorian equivalent of the Salon des Refusés. She is part of Fusion6, which has had two successful portrait exhibitions in recent years. This is her first time in the Archibald Prize.