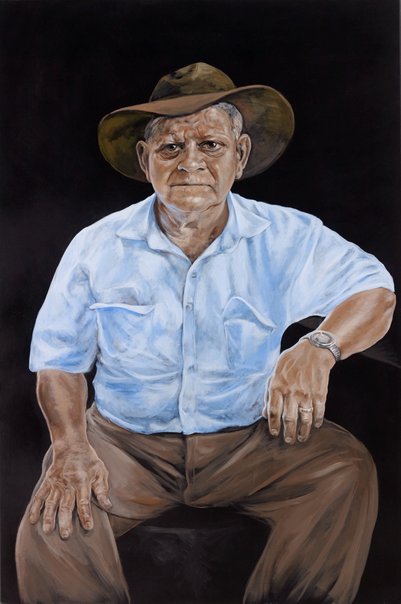 Wilfred Hicks is an elder of the Wong-goo-tt-oo people of the West Pilbara Coast.

After just four years schooling, he worked from a young age on stations and as a labourer and machine operator on roads, water supply and railways. In the 1990s he began representing his people on the West Pilbara Land Council, the Aboriginal Legal Service, and the Aboriginal and Torres Strait Islander Commission (ATSIC).

For the last 15 years, he has been the leading traditional elder advocating for World Heritage List protection for the pre-Ice Age sacred Burrup rock art. He currently directs the global Stand Up for the Burrup campaign.

‘Born on Karratha Station under a tree between 1935 and 1939, Wilfred says he was fortunate, as a “half-caste” child, not to have been taken from his parents by Native Welfare and to have learned his Law and Culture from elders in the bush,’ says artist Julie Dowling. ‘He’s a mentor to me because he fights for cultural knowledge and that’s why I asked to paint him.’

‘I paint because my Badimia family does or tried to for about four generations,’ she says. ‘I started portraits as a child so that I could paint the distinctive features of my family and recognise lost family members on public transport.’

Dowling’s work is held in state and national collections and has been exhibited extensively in Australia and overseas. She has been a finalist in the Archibald Prize twice before, in 2001 and 2002.