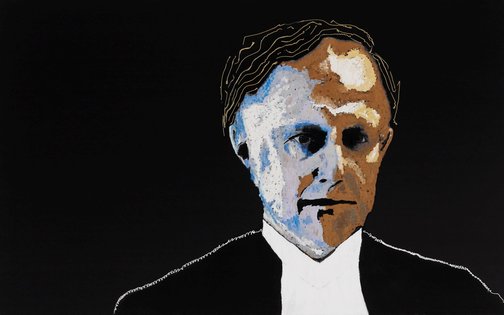 John Emmerig’s subject is Justice Stephen Gageler, who was appointed to the High Court of Australia in October 2012. Prior to that he was the Commonwealth Solicitor-General for four years from 2008 and before that a senior counsel at the Sydney Bar.

‘My painting style is about low clutter. I try for simple but powerful forms, colour contrast, and a degree of rawness and unconventionality in the presentation,’ says Emmerig.

‘The character of the sitter is very important to me. I am looking for a defining or special quality that says something fundamental about the person, or their story, that I like and can convey in the work. Whatever that character trait is, I need to be comfortable in my own mind that it is the “real deal”, so I am unlikely to paint someone unless I have been able to observe them firsthand for a sufficient period to feel that I have a true sense of the person.

‘In Gageler, I seek to convey an essence of quiet strength that I observe in Stephen. That is, a depth and quality of character that is unassuming yet overtly underpinned by a powerful intellect, a humble but determined nature, high integrity, and a calm and considerate manner.’

John Emmerig is a Sydney lawyer and partner with the global law firm Jones Day. His spare-time interests include portrait painting. He has known Justice Gageler for more than 20 years.