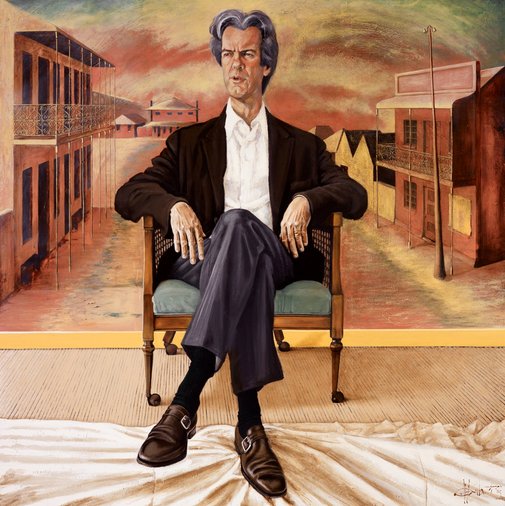 Don Walker is a musician and songwriter famous for writing many of the hits for Cold Chisel for whom he played keyboards. Since they disbanded he has continued to record and tour, both as a solo artist and with the band Tex, Don and Charlie. In 2009, he wrote a memoir called Shots about his time on the road touring Australia.

For the past 40 years, Warwick Gilbert has had a dual career as a musician and graphic artist in the bands Radio Birdman, The Hitmen, The Raouls and Nitebeat, while also working as an animator/director for Walt Disney, Hanna-Barbera and Burbank Films.

‘In 1980 I had the pleasure of touring with Cold Chisel in my band The Hitmen,’ says Gilbert. ‘It was a memorable time and one that left an indelible impression of Don Walker.

‘Don, who is quite an elegant character, just walked in and sat down the way you see him, which was amazing for me as it emphasised his piano player’s hands and in a fortuitous way reminded me of Dobell’s portrait of Joshua Smith, echoing my response to Don’s book Shots.’

Gilbert describes his paintings as ‘an emotional response to my experiences, memories and the artists I have known and loved. My work is often fuelled by a satirical approach, reflecting a certain humour and the sum of my long-standing affair with art and music.’