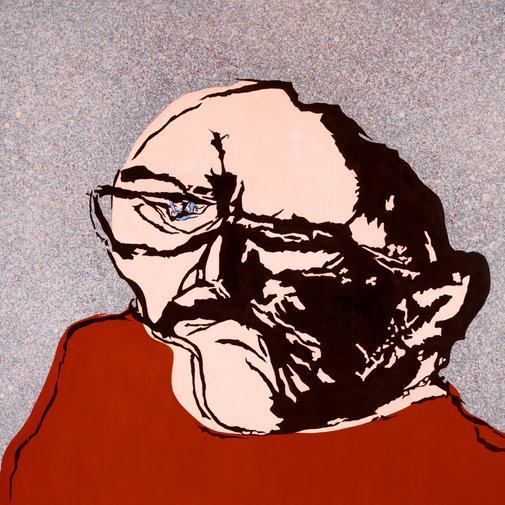 ‘My retinal detachment occurred more than 18 months ago and this is how I look through my damaged eye,’ says Guy Morgan.

‘I started creating this work with a series of simple charcoal drawings. I would observe only with the affected eye and then make marks solely using my good one. That way I could accurately gauge what was happening. However, a psychological barrier stopped me from drawing the full extent of the difference between what I viewed with my left and right eye. My mind would “pretty things up”, rendering me unable to accurately represent the world I observed through deficient vision.

‘Over the last 10 years, my art practice has become a mix of the intentional and the accidental. The background in this self-portrait is painted with an eye dropper, as is most of my work. The speckled surface is reminiscent of the sight loss I faced as my vision deteriorated over a few short hours in 2011. I first experienced a descending grey shadow, then sparks, colour specks and yellow flashes as my retina began detaching.

‘Initially, the Peter Pan figure in the picture was not intentional. My wife identified him after I completed an earlier study.’

Morgan works in Sydney as a freelance creative director. Having trained in England at St Martins School of Art (1974–75) and the London College of Printing (1975–78), he returned to oil painting in 2003. He completed the Master of Studio Arts at Sydney College of the Arts in 2010 and has exhibited widely.