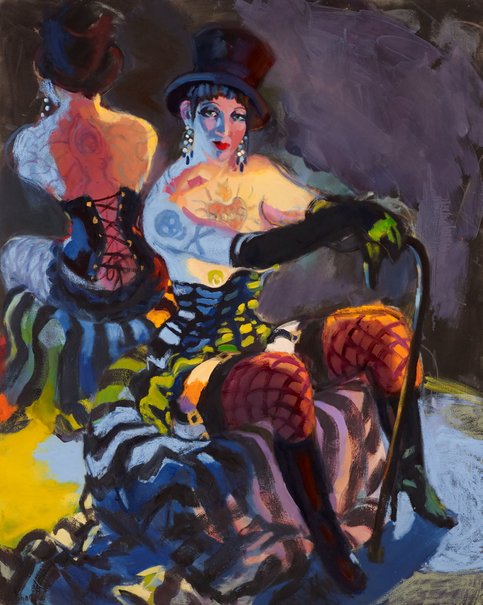 Venus Vamp is a burlesque performer and producer who has been called ‘Sydney’s dark princess of burlesque’. She has been performing since 2006 at venues around Australia.

Wendy Sharpe’s portrait of her is from a series of paintings on the theme of burlesque.

‘I am interested in the more satirical, original or political performers,’ says Sharpe, who has been working on the subjects in venues around Australia and in Paris. ‘I have been drawing backstage, as an audience member, and I have also had performers sit for me in my Sydney studio. Venus Vamp has sat for me several times in two of her stage personas. In this painting she is the character from the show Anything goes cabaret, inspired by the decadence of Weimar Berlin, which she produced in 2011 and 2012.’

Sydney-based Sharpe won the Archibald Prize in 1996 with a self-portrait as ‘Diana of Erskineville’. She has won many other awards including the Sulman Prize and the Portia Geach Memorial Award twice. Her numerous overseas residencies, scholarships and commissions include a commission by the Australian War Memorial as an official war artist to East Timor (the first woman since World War II). Last year she was commissioned by Mawson’s Hut Foundation to go to Antarctica. She has been a finalist in the Archibald, Wynne and Sulman prizes many times over the years.