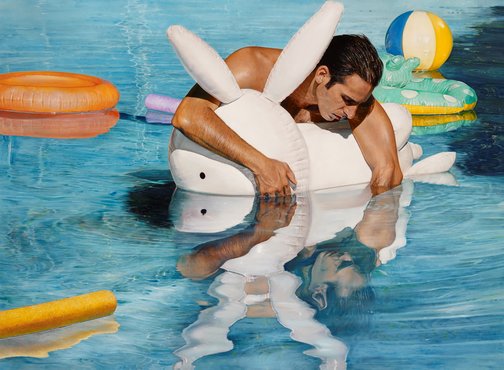 ‘As a self-portrait, Bad dad is an extension of my broader practice,’ says Michael Zavros.

‘In the painting I have cast myself in the role of Narcissus in a contemporary evocation of the ancient Greek myth, and as something of a cautionary tale. In January I returned home from the Bulgari Art Award residency in Italy where I visited the Palazzo Barberini in Rome, and spent time with Carravagio’s Narcissus. Locked in a circle, his reflection enveloped by a creeping darkness, the unusual composition inspired my Archibald entry. In Bad dad the doomed anti-hero doesn’t spurn the affections of a lover for his own reflection. Rather he rejects paternal care and the trials of domesticity.

‘The colour-saturated, abandoned inflatable pool toys (an homage to Jeff Koons) serve as a portrait of my three children in their absence; missing but always with me, like the perfect pop song you can’t get out of your head, the one with the happy riff but sad lyrics. I need them more than they need me.’

Born in 1974, Zavros studied at Queensland College of Art. He has exhibited in Australia and internationally and his work has been collected by most major Australian museums. He has won numerous art prizes including the 2010 Doug Moran National Portrait Prize and the 2012 inaugural Bulgari Art Award. This is his fifth time in the Archibald Prize.