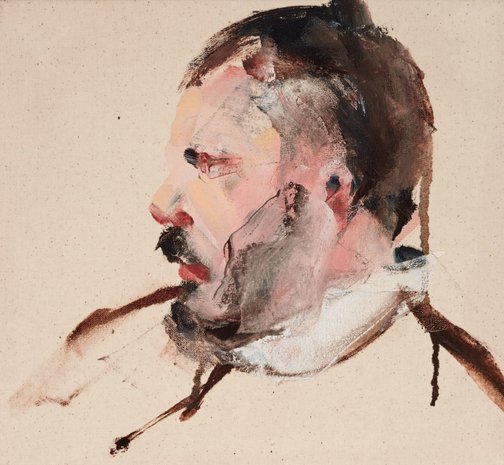 Matthew Kentmann and Nigel Milsom met in the late 1990s when they were students at the College of Fine Arts in Sydney. Milsom is also a finalist in this year’s Archibald Prize.

‘We have remained friends and I have drawn and painted him a number of times,’ says Kentmann.

‘I asked Nigel if he would consider being an Archibald subject in late 2014 and painted him shortly afterwards in his Newcastle studio. Nigel is a man of strong convictions and physical presence. He is also generous, uniquely talented and incisively articulate.

‘I painted him again in 2015 – which is the portrait you see here – and he asked to have the first one, which now lives in his studio. Both portraits were painted from life in one sitting, and I will paint him again. This portrait is a mix of immediate observation and shared history crystallised at a point in time.’

Born in London in 1977, Kentmann is a Sydney-based artist. He has held solo exhibitions in Sydney and Melbourne and was a finalist in the 2014 Hornsby Art Prize, the 2011 and 2003 Dobell Prize for Drawing and the 2006 Redlands Westpac Art Prize. ‘I work with subjects that resonate with me,’ he says. ‘People interest me most in life and art.’