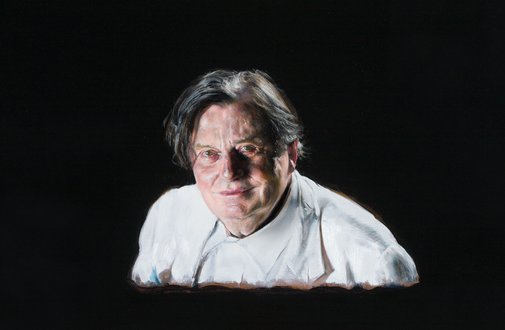 ‘I have admired Barry Humphries since I was a young girl,’ says Louise Hearman. ‘I was enchanted by tales of thin slices of ham being surreptitiously interlarded in great piles of ladies’ flesh-tone control briefs in Myers’ bargain basement, of the derelict who would feast on champagne and chicken at select rubbish bins around Melbourne in front of astonished onlookers, and the long-haired, dapper phantom whom my mother would see on Collins Street when she was a young woman. That genius is now an international superstar.

‘For years I had hoped that one day this frighteningly brilliant individual, who also paints, would see a show of mine when he was in Melbourne and like my work. As it happened we became friends through mutual acquaintances and much to my delight Barry agreed to sit for a portrait. I tried many ideas, but as it progressed, the painting itself showed me the way,’ says Hearman.

Born in Melbourne in 1963, Hearman studied at the Victorian College of the Arts and is known for her dark, dreamlike paintings. The Museum of Contemporary Art in Sydney is mounting a major survey of her work from September to December this year. Winner of the 2014 Doug Moran National Portrait Prize, this is her first time in the Archibald Prize.