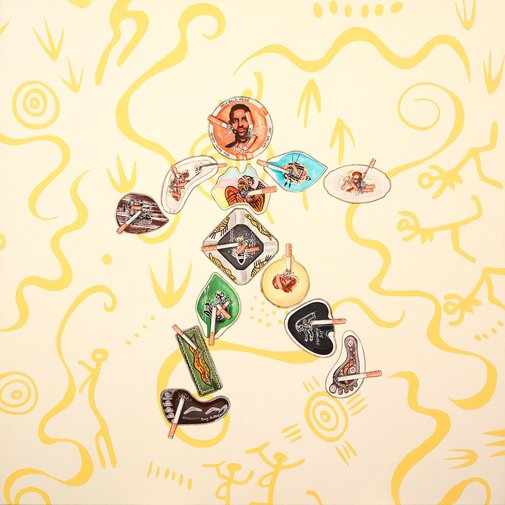 Self-portrait (ash on me)

Tony Albert was a finalist in last year’s Archibald Prize with a self-portrait featuring himself with Tinka, the fictional Aboriginal ‘piccaninny’ illustrated by Brownie Downing. The work was a comment on the influence of ‘Aboriginalia’ in the construction of identity.

Aboriginalia is a term Albert coined to describe depictions of Westernised stereotypes of Aboriginal culture – something he has collected since he was a child.

In this self-portrait, Albert inserts himself into an assemblage of ashtrays from his collection to personify what is often a generalised depiction of Aboriginal culture. In the painting, he examines what it means to stub out a cigarette on Aboriginal iconography, and the metaphoric symbolism attached to these items.

Born in Townsville, Queensland in 1981, Albert has a degree in Visual Arts from Griffith University. In his art practice, he regularly interrogates contemporary legacies of colonialism. In 2014, he won the Basil Sellers Art Prize and the Telstra National Aboriginal and Torres Strait Islander Art Award. His work has been exhibited at many international venues and is well represented in Australia’s major public collections including the National Gallery of Australia and the Art Gallery of New South Wales.