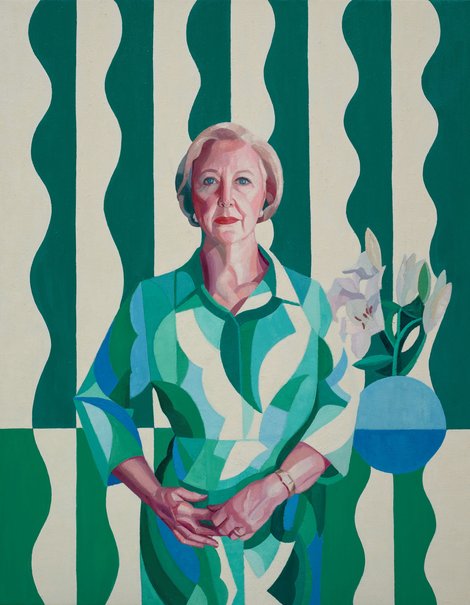 Emeritus Professor Gillian Triggs has combined an academic career with an international legal practice, advising governments and organisations on human rights law. Her five-year term as the president of the Australian Human Rights Commission ends in July 2017.

‘I first became aware of her name listening to the news in my studio in 2015,’ says Yvette Coppersmith. ‘I admired her dignified strength in the face of the Government’s attacks on her position. I met Gillian last year at the National Gallery of Victoria after she took part in a panel discussion on women in leadership.’

‘I approached the portrait with a modernist sensibility, drawing on the style of Rah Fizelle and exploring the visual language of my recent work. It has been a privilege to become personally acquainted with Gillian and to feel her trust throughout the creative process,’ says Coppersmith.

Born in Melbourne in 1980, Coppersmith has a fine arts degree from the Victorian College of the Arts. She has exhibited around Australia and in Europe. She was the inaugural winner of the Metro 5 Art Prize in 2003 and is a four-time finalist in the Portia Geach Memorial Award. This is her fourth time in the Archibald Prize.