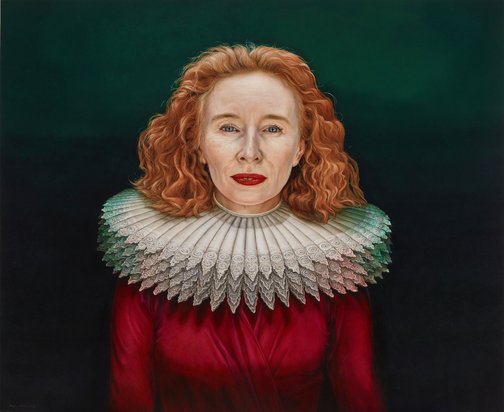 Alison Whyte, a mother of the renaissance

Alison Whyte is an accomplished actor with numerous credits to her name, including television series such as Frontline and Satisfaction and the film The dressmaker. She has also performed extensively for Melbourne and Sydney Theatre Companies among others, winning a Helpmann Award for her portrayal of Elizabeth in MTC’s 2010 production of Richard III.

For the past year, Paul Jackson – who was born in Auckland in 1950 and moved to Sydney in 1976 – has been painting a body of work titled Antipodean renaissance. Known for his Maori-themed works, he decided to tackle something a little different for this year’s Archibald Prize, while still choosing someone who would fit into that broad theme.

‘Alison is an actor I have admired since seeing her on Frontline. It was also helpful that her face has an Elizabethan feel – hence the ruff, a typical fashion item of the day both in the street and on the stage of the Globe Theatre. From a technical point of view, it enabled me to throw under-lighting on her very fair skin to create a luminosity typical of Tudor Renaissance painting.’

This is Jackson’s eighth time in the Archibald Prize. He won the People’s Choice award in 2006 and the Packing Room Prize in 2009.