Expressionism is a term that can be used to cover a huge variety of subjects and styles in which shape or colour is exaggerated or distorted so as to express the emotional essence of a subject.

In Germany, where it was dominant in the first decades of the 20th century, Expressionism is associated with two generations of artists. The first – such as Ernst Ludwig Kirchner, Franz Marc and Wassily Kandinsky – included the Brücke and Blaue Reiter groups, founded between 1905 and 1911, which were swept up by the idealism and optimism of the new century. The second, born ten years later – like George Grosz and Otto Dix – came to maturity on the brutal battlefields of the First World War.

This exhibition starts in Berlin in the heady years leading up to and at the beginning of World War I when Kirchner and some of his fellow Expressionists moved there to seek out new subject matter and audiences for their revolutionary art movement. This marked a distinct turning point in the evolution of Die Brücke towards subjects that dealt with life in the city.

Visions of the world on the brink of an apocalypse and dynamic impressions of a generation eager for war are featured with scenes of the metropolis. Anxieties about living in the modern age often centred around sexual representations of the female body, as depicted in these striking paintings by Ernst Ludwig Kirchner and Heinrich Maria Davringhausen, and in other works throughout the exhibition. Women are portrayed as symbols of modernity revealing the tensions between traditional female roles and the new roles for women in an increasingly urban and industrial society. 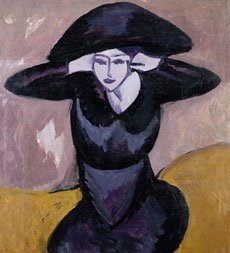